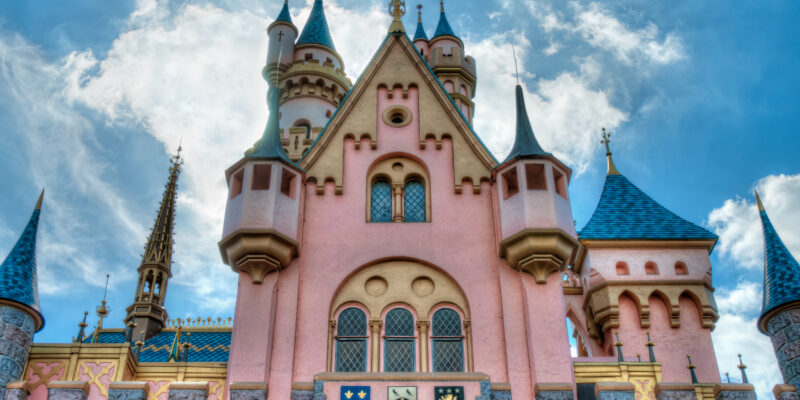 Ladies and gentlemen, the eighth wonder of the world – the backside of the castle! This often overlooked side of Sleeping Beauty Castle was once meant to be the front side. It’s strange to think of, isn’t it? It’s a challenge to imagine our beloved Disney icon as being anything other than what it is. I was giving that a little thought while standing in Fantasyland one day. It was a beautiful day and the sky was filled with dreamy clouds, which always makes time in Fantasyland that much better. 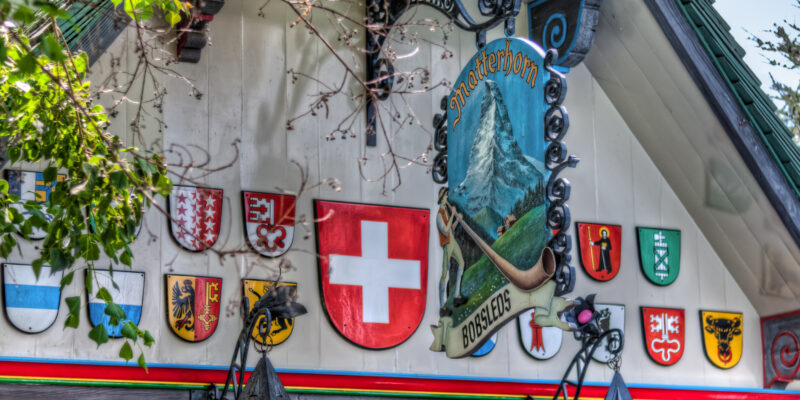 When Disneyland opened in 1955 Fantasyland was in a much different form. The Matterhorn didn’t exist yet, The Mad Tea Party (Tea Cups) sat where King Arthur’s Carrousel is today, and the Carousel was squeezed between the Tea Cups and Sleeping Beauty Castle. The overall theme of the land was dressed with tournament tents and had a very medieval fair atmosphere. The original drawings of Fantasyland by Herb Ryman looked like a small village with a fairytale like theme, which is much of what you see today. Due to economic factors, and time constraint, the original much cheaper theme was implemented. In 1983, Kim Irvine, Director, Concept and Show Design at Walt Disney Imagineering, re-opened Fantasyland with the village theme that was intended in the first place. It’s amazing how much Disneyland has evolved over the years, and how naturally accepted the changes have been. It is a great testament to the future of the Disneyland Resort. 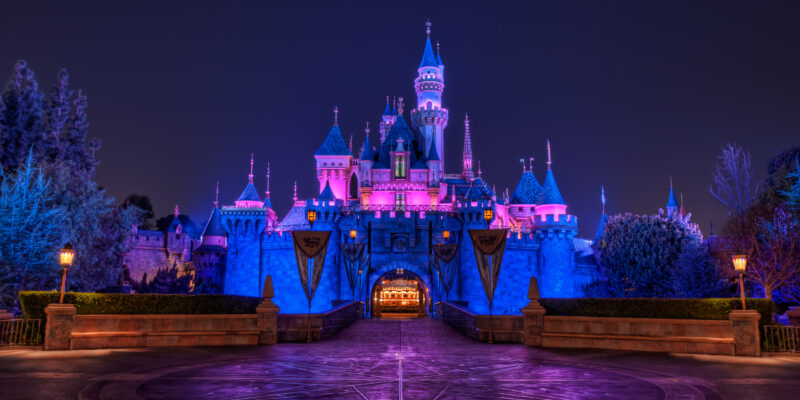 Staying out late at Disneyland can be exhausting. It’s rare, however, that the payoff for postponing a date with your pillow doesn’t make you deaf to the barking of your feet and forgetful of how tired you may be. From being able to run around the Park and practically walk on the E-Tickets to those quiet, deep moments of self reflection, Disneyland after dark is it. It’s my perfect place and I imagine if you are reading this that it’s yours too. If you find yourself fortunate enough to be the last soul to bask in the radiant glow of Sleeping Beauty Castle, cherish that moment and take it in. There is nothing like it. Standing there in front of that icon, that tangible proof that dreams really can come true, it’s as though someone somewhere cues the line from Walt’s opening day speech, “Disneyland is your land”, and it carries oh so softly on the night air. I have never felt so much that Disneyland was mine as when standing at the castle in solitude.

One of the great things about Walt Disney was that he shared the rewards of the risks he took. Few thought Disneyland was a good idea in 1955. It was a tremendous risk. But it was also a dream. Walt shared his dream of Disneyland with the hope that it would be a source of joy and inspiration. It serves as an appeal to everyone who walks through its gates to never quit dreaming or taking risks to pursue them. We each have a purpose in this life and no one can replace us. We each have the power to make the world a better place, whether it be for one person or a multitude. No person is insignificant.  Michaela and Kevin and I know that these are just pictures that we post, but we pour ourselves into them with the hope that we might inspire you and bring a little joy into your life every day. These are the kinds of things I think about, standing at the castle in solitude. These are the dreams that take form in Disneyland after dark. 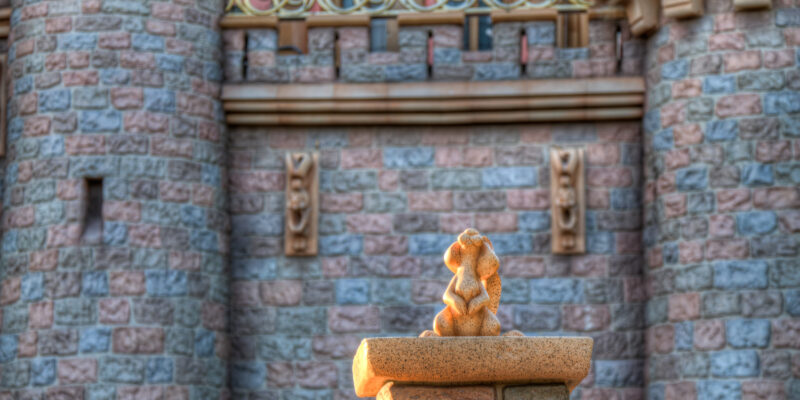 The little details in Disneyland make it so complete. The little statues of woodland creatures around Sleeping Beauty Castle are adorable and you really can’t help but smile and reflect once upon a dream. Wouldn’t it be nice to be able to hang out by the Castle all day everyday? Can you imagine all the moments these bunnies could share? Proposals, first trips, first pictures in front of the Castle. All rites of passage in a society enamored with the ideals Disneyland is dedicated to. We hope you enjoy our perspectives of these lucky little guys. 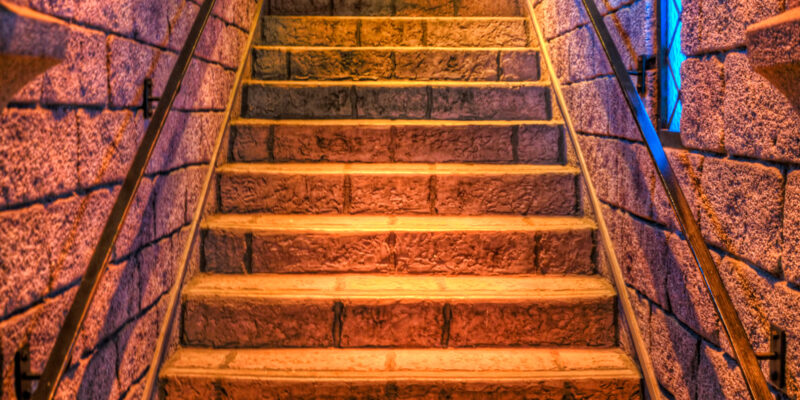 Upon entering the Sleeping Beauty Castle Walk-through, you are greeted by this magical, mysterious staircase. Curiosity is certainly sparked and climbing the steps is an inevitability. Exploring castle corridors is a thrill you wouldn’t expect in Southern California either. Thank goodness for Disneyland! 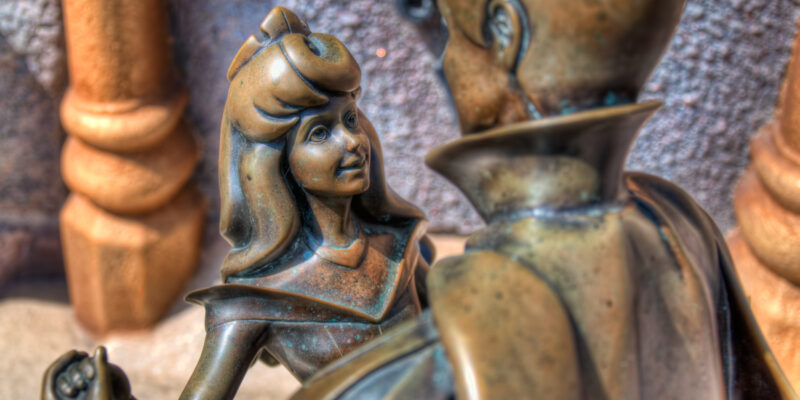 Crazy things happen on Twitter some times. Crazy, unexpected, amazing things. We recently had the pleasant surprise and pleasure of such a thing. We were given the opportunity by a friend on Twitter to ask Mary Costa a question. If her name isn’t familiar to you, her voice certainly is, in the role of Sleeping Beauty. We were thrilled at the opportunity and gave it sincere thought. We decided on asking what the most challenging thing was to overcome in playing Aurora. We felt that it might not be a typical question for her and stories of overcoming are always inspiring. We were certainly not disappointed with her answer and hope that it moves you the way it did us. Here’s the e-mail we received from our friend:

“Hi! Mary said that she thought your question was a great one. Matter of fact, she had to think a moment. She then told me of how she and her father use to play around doing funny accents when she was growing up. She lived in Knoxville up until she about 15 (I think that was the age). Anyway, she had quite the southern accent in her normal speak. So, when she was on the sound stage rehearsing for Sleeping Beauty, she started doing the roll with her normal voice (thus with her regular southern accent). Marc Davis came out of the sound booth one of the first days and was asking her about her accent. She could tell that he and the other Disney people seemed concerned. He asked her if she had ever heard someone speak with a British accent and she responded perfectly in a British accent. And he looked amazed. He asked her how she did that and she told him how she and her dad use to play around doing different accents when she was growing up.  Mr. Davis left momentarily and when he returned he asked her if there was anyway she continue to do that British accent for an extended bit. And it went from there. She continued to do the roll as Aurora with the British accent until it was complete.

So, the answer to your question was overcoming her southern accent was the biggest obstacle she faced in playing the roll of Aurora. She said that she had to remind herself during production of Vivian Lee. If a British actress could play a southern lady in Gone With the Wind, then surely she could do the opposite.”