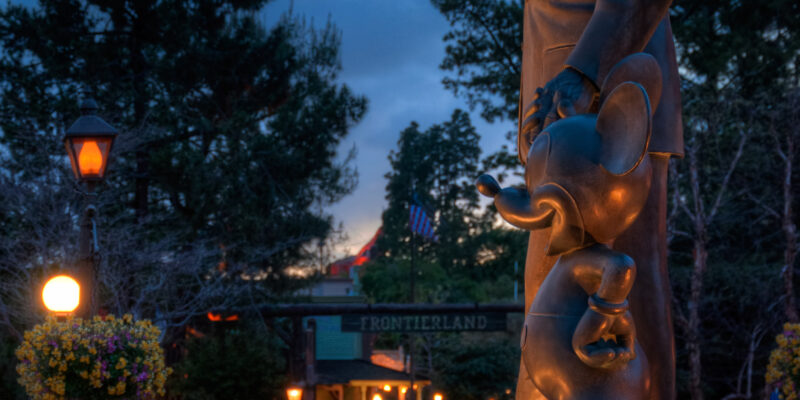 I honestly can’t even recall taking this picture. There are a few like that in my library and it bothers me. I don’t like that I experienced something that moved me to take a photograph but the memory of it is beyond my mind’s reach. It is, however, one of the greatest things about photography. No matter what my mind decides to file as important or throw like chaff to wind, I have the images I’ve taken to capture moments, feelings.

I can’t recall what it made me feel then but I know what it makes me feel now. The calming of a storm at the end of what appears to have been a tempestuous day balances beautifully with the warm light on Walt and Mickey. In a single, still image, the story is simple – the warmth of friendship can carry you through a storm.

Philosophical? You better believe it.

What is the point of art, if not to feel, reflect and express in tangible form the chaos bubbling inside us? To get art out of oneself is to silence the turbulent clamor within for a while. It’s not so very different from the storm clouds. Thoughts, ideas, emotions all take shape but so many of them fade before we can identify their form.

Art can be a friend. It will listen to you no matter what you have to say. It will teach you things about yourself you didn’t know. It will challenge you to grow. It will never judge or leave you. It will simply wait on you with a warm embrace to help you through an inner storm.

Can I get an amen? 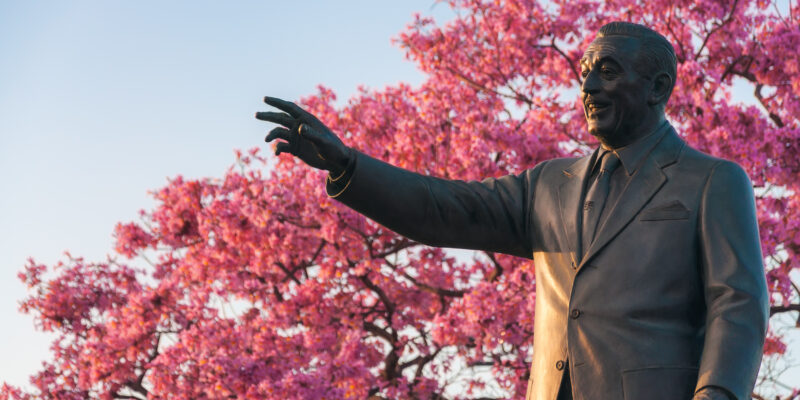 The Partners Statue on Main Street seems to impart the idea of Walt Disney that’s been built up in my head, that he was a perpetual optimist. No matter what I read or see or hear of the man, there he is, believing for a better world and reaching for progress. He wasn’t perfect. As his daughter, Diane, so eloquently said, “what made him human is what makes you human.” Even so, sometimes it’s hard to comprehend being the same species as someone like Walt Disney.

I recently came across an article titled Disneyland is Good For You that features a great deal of insight from Disney Legend, John Hench. In the article, Hench blows minds every few lines or so with casual brilliance, talking about how much thought goes into an experience like Disneyland to make it what it is. A bit that really stuck out to me, though, was when John wondered if people would really appreciate perfect details like real leather straps on a stagecoach. According to Hench, Walt’s response was, “If they don’t appreciate it, if you do something and people don’t respond to it, it’s because you are a poor communicator. But if you really reach them and touch them, they will respond…because people are okay.

I don’t know that you’d find those words coming from my lips without qualification of some type or another. Maybe “some people are okay” or “people are okay sometimes“. But to leave it at “people are okay”??? Uh uh. Have you seen what’s going on in Ukraine? Don’t even get me started about Twitter. Walt must’ve known something I have yet to learn or maybe there was a lesson I’ve had that he chose not to accept. Either way, I think we can all agree that in July of 1955 when he said “To all who come to this happy place, welcome” he really meant it. It’s evident that the sculptor knew it. As much as Walt’s reaching forward he’s also welcoming in every single person who comes to his happy place and assuring them that they’re okay. They might not believe it. But Walt sure did. 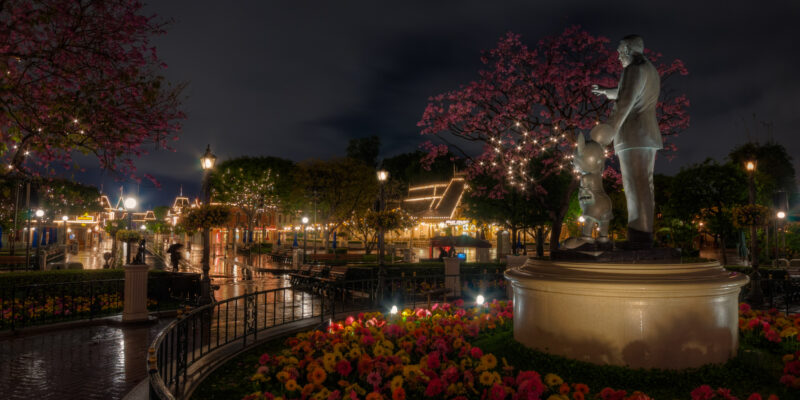 It had been a long, wonderful, rainy day. We’d come prepared with umbrellas and plastic bags for covering our cameras. It was an adventure.

Whether we like it or not, whether we acknowledge it or not, life is an adventure. I know that many of you reading this know that. It’s part of the reason we love Disneyland. It’s an ideal adventure; a day filled with opportunities, missions and decisions. You can expect the unexpected. You can do the impossible. Good always triumphs over evil. (I don’t know about you, but for me, that is a prerequisite for a good adventure. What would Raiders of the Lost Ark be if the Nazis had beaten Indiana Jones? It may have still contained elements of adventure, but it would be a tragedy.) I think Walt, ever the optimist, intended for Disneyland to not just be an ideal adventure, but to inspire us to live our own ideal adventures. In everything he set his hands to, he aimed to entertain, but more importantly, to bring out the goodness in people. That’s remarkable. So often, we look to the future, thinking that someday things will get better, things will be better. It’s great to be hopeful for the future but let me ask you this – why not today? Why shouldn’t “better” be right now? We have a tendency to procrastinate when it comes to taking charge over our lives and sometimes we get caught up with the failures of the past or, perhaps, the nostalgia of it, all of which prevents us from making the most of the present. Adventures don’t happen in the past, though we can look back fondly on them and learn from them, nor do they happen in the future, though we can do our best to prepare for them. So quit talking and lay hold of that wonderful thing called “life”. Adventure happens now. 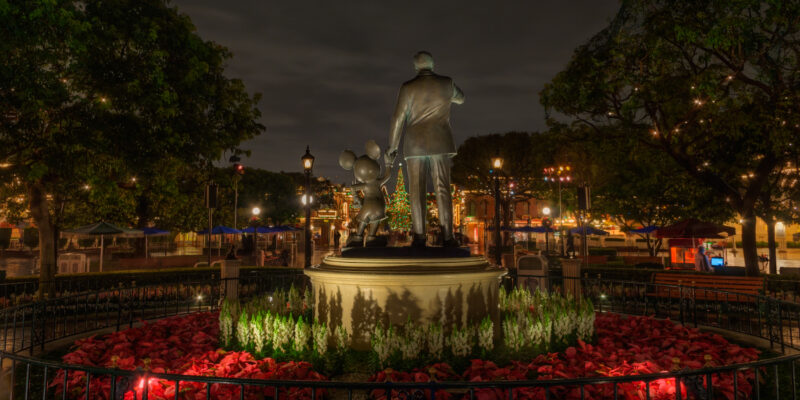 Though we have escaped apocalyptic doom this year, we have not escaped tragedy or heartache. It’s easy to get enraptured in the idyllic scenes of Disneyland and forget a somewhat cold reality around us where bad things happen. Forgetting, at least momentarily, is part of the appeal; we can leave today and enter a world of fantasy. Don’t mistake me, I don’t mean this in a negative way at all, quite the contrary. Disneyland is a place where you can go and slough off the refuse of everyday life, a kind of detox for the soul. Walt’s hope that his park would be a source of joy and inspiration to all the world was fulfilled exceedingly and in abundance. But wouldn’t it be wonderful if everyday life were better? I pray the new year will be filled with inspiration to make it so and joy to strengthen us in getting there. 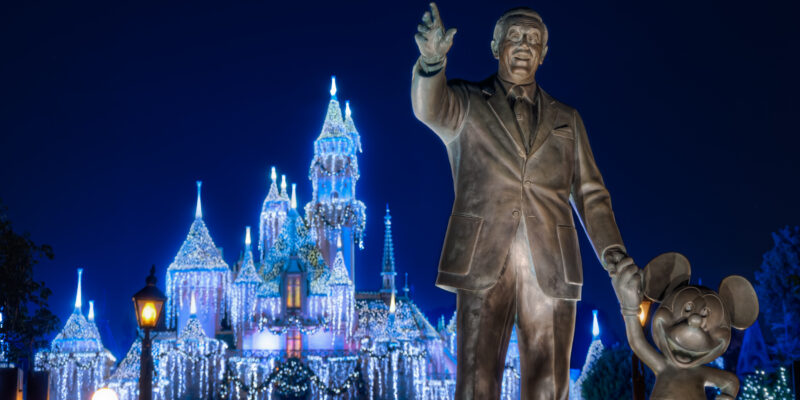 It used to be that the rush from one holiday to the next would frustrate me but it seems that there’s no avoiding it anymore. And honestly, I’m ready for Christmas. Changes in life are like a snowball rolling down a hill, gathering mass and momentum. There’s no use in trying to stop change. You’ll only end up cold and soggy.

The holidays always bring about this renewed sense of hopefulness and optimism. Not for things. Sales may abound but we all know deep down that stuff doesn’t matter. What matters are the people around us in this vast world. The hope we feel this time of year is that which eagerly anticipates that people will be better, that we will be better, that patience, kindness and compassion would increase. These are the things that have the power to make life brighter.

That’s the sort of thing I always think about when I’m at Disneyland during the holidays, especially in this spot. Walt was just a man but I think we can all agree that he made it a little easier to hope for the good in people and to dream the impossible. I’m ready for Christmas this year. I’m ready to make amazing memories with family and friends. I’m ready to see how I can be a blessing to others. I’m ready for change and I’m hopeful. 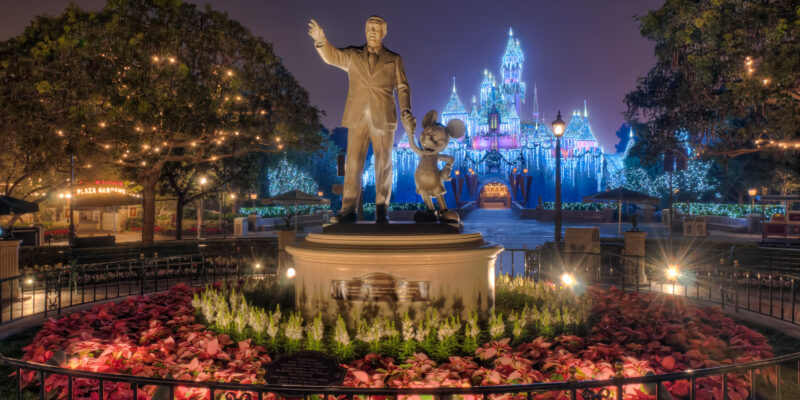 The Disneyland Resort has officially started their holiday season this week. It’s amazing how quickly the season has come upon us but I’m greeting it as the old friend that it is with open arms. Thanksgiving is just around the corner and before we know it, Christmas. I feel very fortunate to be able to visit Disneyland during this time because it really does help make the season brighter. Even with all the charm that it has every day, Christmas time at the Park leaves you feeling a little extra warm inside, with idealistic hope that the rest of the year tends to wear on. Browsing through the pictures I’ve taken to decide on one for this evening, I kept coming back to this one. Walt and Mickey surrounded by Poinsettias in front of an icicle covered castle just said “welcome” to me. So to all who come to this happy place for this happy time of year, welcome.